Why does my dryer smell like it is burning? Well, if you also see smoke, it’s time to call the fire department. Dryers do start 2,900 fires per year, according to the U.S. Fire Administration, so this is not a possibility that you should ignore. 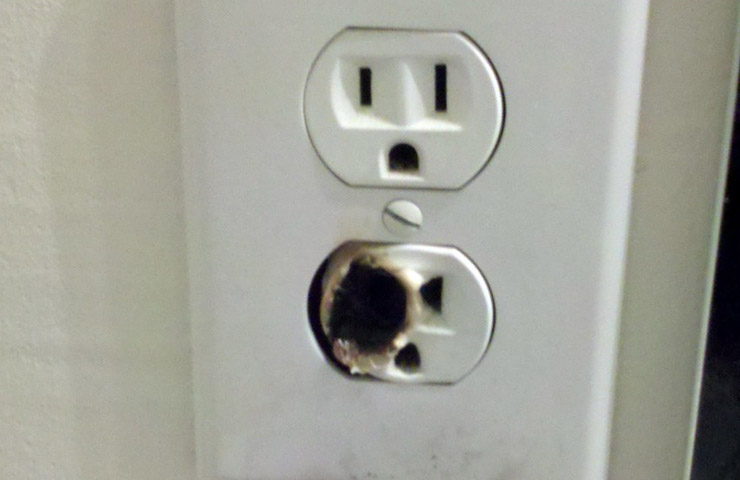 If you do not find a fire in or near the dryer, you should still investigate the cause of the burning smell and avoid using the dryer until the problem can be corrected. Learn about the potential causes of this problem and what to do about it to prevent escalation.

The most common cause of a burning smell from a dryer is an overfull lint screen or a dryer vent that has a lint clog in it. Lint is highly flammable and can burn or catch fire from the heat of a dryer, causing the burning smell. It is important to take the lint out of the trap after every single dryer cycle. It is also important to have your dryer vent cleaned out to prevent lint clogs which can cause fires.

In some cases, damage or issues with the dryer may also cause lint to leak into the actual body of the dryer, in which case it needs to cleaned out.

The dryer has its own thermostat, which keeps track of its temperature. But if it breaks, then the dryer may overheat, without a mechanism to check it. This can scorch clothing and create a burning smell that you can sense.

The drive belt is a part of the motor that experiences a great deal of friction. Whether from age or malfunction, the drive belt can begin to wear down and burn, causing the smell. You should not try to take a look at the belt yourself unless the dryer is off and unplugged or the gas supply is turned off. Typically, you won’t want to replace the drive belt either but replace the whole dryer instead.

The heating element is the part of the dryer that generates heat. If it is malfunctioning, it can produce more heat than normal and cause the burning smell. The heating element is an expensive part of the dryer and very important. Typically if this part has failed, it is wiser and more cost-effective to simply replace the whole dryer rather than replace the single part.

Lastly, the burning smell may not be from the dryer itself but from the electrical wiring running to it. Power surges and other sources of electrical damage may cause the wires to burn something in or near the dryer, causing the smell. If you suspect electrical issues, you should turn off the breaker controlling the damaged area and then call the professionals.

How to Protect Your Dryer from Burning

You can protect your dryer from burning in the future by following these steps:

You can have an HVAC technician clean your dryer vent and otherwise maintain your dryer for you.

Why does my house get so dusty?
Is It Normal for Smoke to Come out of a Dryer Vent?
8 Smart Ways to Maximize your Indoor Air Quality
By bradfordairandheating|2022-08-25T08:11:45-08:00August 25, 2022|Indoor Air Quality|Comments Off on Why Does My Dryer Smell Like Its Burning?